Proenza Schouler Up and Running on RLM After Fast Paced Implementation

In just five months, RLM Apparel Software transitioned the New York based womenswear and accessories brand from its outdated system into a fully integrated, PLM, ERP and Accounting Solution.

Faced with a fragmented software system that was not fashion friendly, Proenza Schouler turned to RLM Apparel Software to implement their fully integrated, feature-rich, fashion-specific solution in near record time. The scope of the project included deploying RLM’s system across the Design, Production, Merchandising, Sales, Logistics, Operations, and Accounting Departments, in both their NYC and Italy office locations. Additional integrations were made to six different third party vendors as well.

Proenza Schouler also retired its outdated Accounts Receivable, Accounts Payable and General Ledger systems by expanding the scope of its accounting capabilities with the implementation of RLM Financials. Previously, Proenza Schouler’s financial reporting had to be processed through a third-party software tool which proved difficult to use and required a full-time employee to help generate reports. RLM’s out-of-the-box accounting software features their custom built-in financial statement report writer which eliminates the need for dealing with third party software and a different vendor.

Today, as many as 70 users across the Proenza Schouler organization are benefiting from RLM’s all-in-one solution that has enabled them to eliminate four different software tools and a cloud server hosting vendor. Proenza Schouler gained data processing efficiencies that were not achievable in their previous system, while shredding cumbersome manual processes for managing their retail EDI customer orders and benefiting from RLM streamlining their third-party warehouse processes.

Most notably, RLM successfully facilitated a series of third-party integrations including:

Proenza Schouler is a New York based womenswear and accessories brand founded in 2002 by designers Jack McCollough and Lazaro Hernandez. Named after the designers' mothers' maiden names, the collection was bought in its entirety by Barneys New York.

Proenza Schouler is defined by its fusion of craftsmanship and attention to detail with a sense of refined ease. Inspiration drawn from contemporary art and youth culture is combined with an emphasis on tailoring and the use of custom developed fabrics. 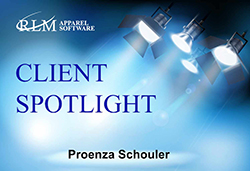